March 14th is coming up and 3/14 = 3.14 = the first three digits of Pi = Pi Day! This date isn’t just revered among math nerds and science geeks. Ever since National Pi Day in 2015, when the date was 3/14/15, or represented the first five numbers of pi (and even more if you considered the time of day, morning and night, which many people did: 3.1415(9:26:53 or 9:26 and 53 seconds!), awareness of pi day has increased. As a result, pi day has grown in popularity beyond the cloistered halls of math, science, engineering and physics. Of course we at Manhattan Fruitier had to jump on the bandwagon too and find a way to make Pi Day more fun!

For the last several years, we have been making Pi Pies for Pi Day. Naturally, pie-eating is one of the main activities of Pi Day, and we love homophones and alliteration too! Our Pi Pies are sweet (literally and figuratively) little hand-held pies that are flaky little gems filled with raspberries and branded with a hand cut pi sign which looks like this:

Our Pi Pies are made exclusively for Manhattan Fruitier by the wonderful bakers at Sweet Leaf Bakery in Long Island City! We put three Pi Pies in our adorable “blue box” for a delightful surprise on your Pi lover’s doorstep. 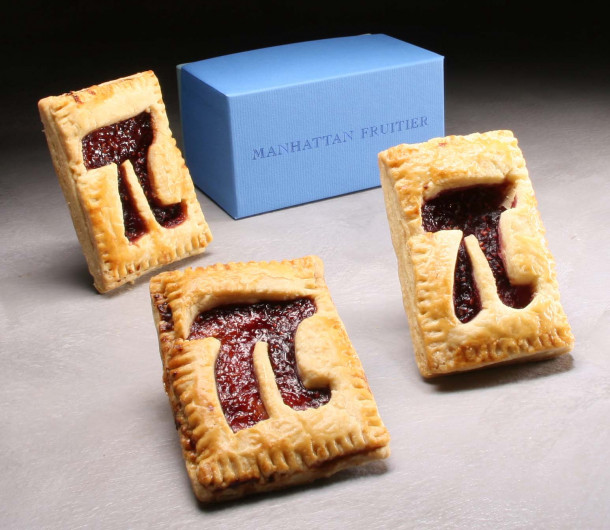 Sweet Leaf has a small commercial kitchen so we aren’t able to request very many Pi Pies. We get one delivery right before Pi Day so don’t wait too long to order or you will be out of luck and your Pi Day celebration won’t be nearly as merry.

Here in the United States, children learn about pi in geometry classes which usually begin in 6th or 7th grade (unless you are advanced!) For those of you who may need a refresher, pi is the number you get every single time you divide the circumference of a circle by its diameter. It doesn’t matter the size of the circle: the result will always equal 3.1415926535897…..!! That’s pretty remarkable!

Pi was calculated and has been used since the earliest known ancient civilization of Mesopotamia, somewhere between 3800 to 3200 BCE, when the wheel was invented. Pi is also what is called an “irrational” number which means that it cannot be expressed as a fraction and the number of decimal places is infinite. The symbol for pi (π) is the 16th letter of the Greek alphabet and was chosen in the early 1700s because it is an abbreviation for the Greek word for “perimeter”. Pi is fairly ubiquitous: it is used as a constant in formulas in math, physics, engineering and architecture, and the natural biological sciences as well.