St. Patrick’s Day is observed on March 17th, the day that St. Patrick died in 461 AD. This holiday celebrates the introduction of Christianity (specifically Catholicism) to Ireland as well as Irish culture, folklore and traditions. Originally a holiday celebrated only by the Irish, today St. Patrick’s Day has become a multi-national festival. People from all backgrounds turn out for their town’s annual St. Paddy’s Day parades and join in on other holiday traditions such as hanging out in Irish pubs to drink Irish beer and Irish whiskey; eating Irish dishes such as Irish Soda Bread, Shepherd’s Pie, or Colcannon; listening to traditional Irish folk music; singing Irish ballads; and wearing green-colored clothes and/or carry shamrocks.

St. Patrick’s Day is also known as “Roman Catholic Feast Day or “The Feast of St. Patrick”. Interestingly, March 17th falls smack dab in the middle of the Catholic religious season of lent (between Ash Wednesday and Holy Saturday before Easter Sunday) when excessive drinking and feasting is strongly discouraged if not prohibited. Historically, these sanctions were lifted for St. Patrick’s Day which may have contributed to this holiday being known as a raucous daytime party with happy drunken revelers!

We never miss an opportunity to create a gift for a specific holiday, and St. Patrick’s Day is no exception! Building on the themes of this Irish tradition, we paired our fresh fruit hamper — well, we are a Fruitier after all — with a charming green and gold Shamrock Cookie Trio from our beloved Duane Park Patisserie and an authentic Irish Soda Bread made by our friend Amy from Amy’s Bread. We call this St. Patrick’s Day gift our “Luck of the Irish”. If you are looking for a “Pot of Gold” then we can add a delectable box of three types of chocolate treats: Irish whiskey truffles, Irish coffee bonbons, and Irish cream truffles (see photo below). 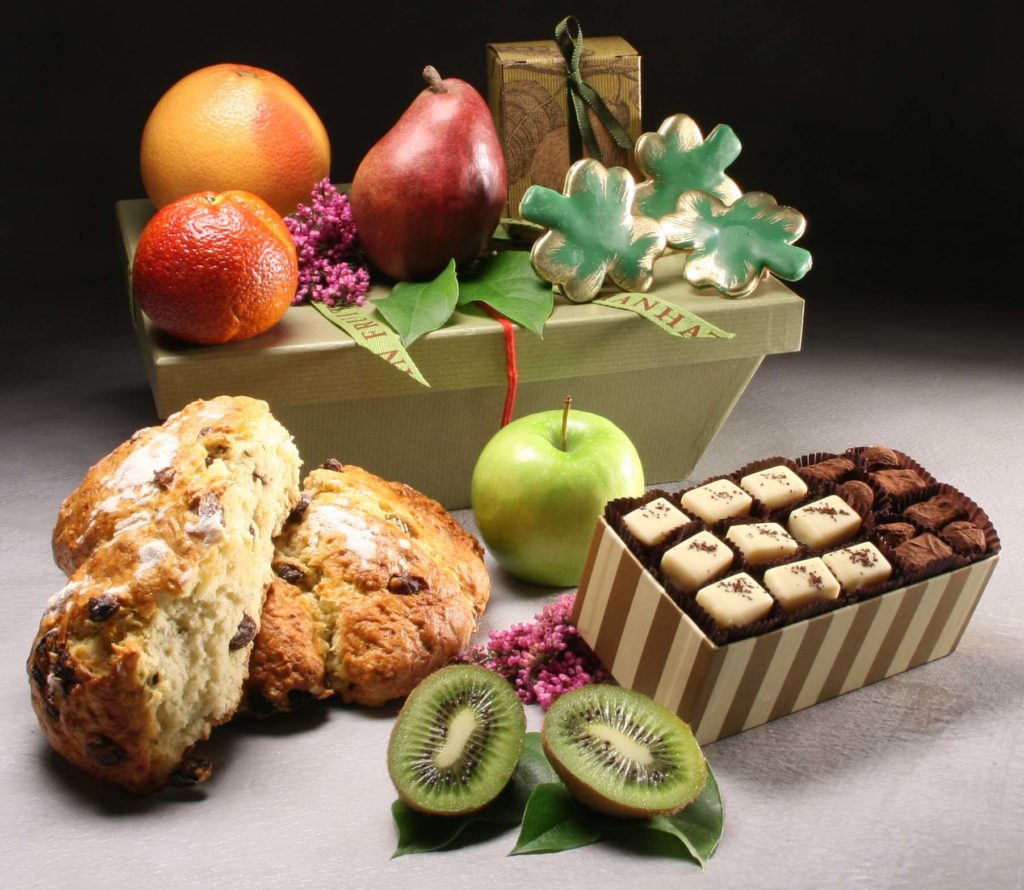 Delight your Irish friends and family with our “Pot of Gold” St. Patrick’s Day gift!

St. Patrick was a real saint, although never actually canonized by a pope. Still, he became the biggest saint in Ireland and he wasn’t even Irish! He was born in Britain around 385 AD and it is said that his real name was Maewyn Succat. When he was 16 years old, he was captured by the Irish and taken to Ireland where he worked for 6 years as a shepherd. During the time of his enslavement, he found God, made his way back home and studied for the priesthood. Later he returned to Ireland as a missionary and changed his name to Patricious (or “Patrick”) derived from the Latin for “Father Figure”. In Ireland he converted many Druid’s, who worshiped nature and harmony with the earth, to Christianity. St. Patrick is renowned for “driving the snakes out of Ireland”: a metaphor for ridding the country of pagan religions. Factually, there are no snakes in Ireland!

St. Patrick is also closely associated with the shamrock, so we had to include Shamrock cookies in our St. Patrick’s Day gifts! Legend has it that St. Patrick used the three-leafed clover to illustrate the Holy Trinity — the God, the Son and the Holy Spirit as three parts of a whole –- to the uninitiated. In statues and other imagery, St. Patrick is often shown holding a posy of shamrocks in his hand.

Drinking Irish whiskey or Irish beer in Irish pubs is a time-honored activity on St. Patricks Day. Many bars open early so the drinking often begins first thing in the morning and extends through-out the day! We couldn’t imagine creating a St. Patrick’s Day gift that didn’t have a nod to Irish whiskey, Irish coffee and Irish cream.

Wearing green on this day is a ritual that is followed by people of Irish heritage and non-Irish heritage alike. Green is the color associated with Catholics in Ireland (orange for Protestants) and Irish folklore says that wearing green can hide you from the mischievous fairies known as leprechauns who will pinch you if they can see you. Even today people not wearing green on St. Paddy’s Day are risking a pinch from a passer-by!

The largest wave of Irish immigration occurred of course shortly after the devastating potato famine. About 2 million Irish people who were able to escape the starvation and disease, immigrated to the United States shores beginning around 1845.

Today there are over 30 million people in the United States who are of Irish descent. So it’s no wonder that St. Patrick’s Day has grown to be a national celebration. In Chicago, the city dyes the Chicago River green! It only lasts a few hours but it must be a sight to behold! Here in New York City, the renowned St. Patrick’s Day parade, official since 1848, draws millions of people. That’s why they say, “On St. Patrick’s Day, everybody’s Irish”.

Don’t forget to treat your friends, family and co-workers (whether of Irish heritage or not) to our fun St. Patrick’s Day gifts to acknowledge this spirited holiday. Eirinn go Brach (in Irish Gaelic) or Erin go Bragh (the English bastardization) which loosely means “Ireland until the end of time!”