The “Purim Story” is derived from the Book of Esther, or “Megillat Esther”. The dramatic events that form the basis of the Purim celebration are described in a prior blog on the History of Purim. Today, we wanted to focus on some of the customs surrounding this holiday, particularly those that entail the special foods eaten during the happy Purim feast and the Mishloach Manot (Hebrew) or Shalach Manot (Yiddish). This year, the Purim celebration begins on Wednesday, February 28th and ends on Thursday, March 1st.

Literally translated as “sending of portions”, the Misloach Manot is specifically mentioned in the Book of Esther: “…. Therefore do the Jews of the villages, that dwell in the unwalled towns, make the fourteenth day of the month of Adar a day of gladness and feasting, and a good day, and of sending portions to one another. …” Thus, one of the traditions of Purim is to send gifts of food and drink to friends and family. Anyone above the age of Bat Mitzvah (12 years old for girls) or Bar Mitzvah (13 years old for boys) is expected to participate in the Shalach Manot.  The foods must be ready-to-eat and there must be at least 2 types of food included (that is, food that requires different blessings from each other). The obligation is to send to one person, but most people send gifts to many.

It is also customary to use a 3rd party messenger to give the gifts since Misloach or Shalach means “to send” rather than “to give”. That’s why we at Manhattan Fruitier offer a line of gifts for Purim that we can deliver for you! We have four Mishloach Manot ideas that should please anyone on your gift list. 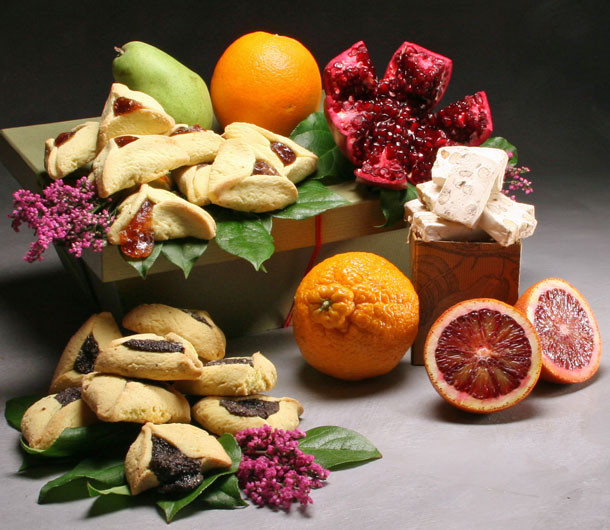 Each of our Purim baskets contains the essential food that most embodies the meaning of this holiday: hamantashen! Hamantashen is a three-cornered or triangular shaped pastry that is folded to disguise (not completely, but partially) the sweet fruit-based fillings inside. Most Misloach manot ideas would include hamantashen. Our baskets for Purim include both the traditional poppy seed hamantashen as well as apricot, and they are both Kosher.

If you already know the story of Purim (if not, you can refer to our blog on the History of Purim — see link above) you will know that Haman was the evil Prime Minister of the King of Persia, who was married to Esther. Haman plotted to massacre the Jews but was thwarted by Esther. Hamantashen (Yiddish) is literally translated as “Haman’s hat” or “Haman’s pocket”; in Hebrew it is called Oznei Haman meaning “Haman’s ears”, and these little pastries do resemble these items.

The word tash in Hebrew means “weaken”. It may be that eating hamantashen or “weakening Haman” symbolizes the many incidents described in the Megillah where the tables are turned on Haman. For example, Haman was once strong and in the king’s favor, then he was out of favor with the king and became weak; Haman wanted royal robes and to ride the streets on a royal horse, but Mordecai ends up being given that privilege; Haman was once the Prime Minister, then his nemesis Mordecai was given his position; Haman once owned property, then Queen Esther inherited it; Haman once plotted to kill the Jews, and then he and all his family were killed, etc.  Another interpretation is to show that something bad and evil can be turned into something sweet.

The way hamantashen is made also reflects one of the core themes of Purim. The sweet goodness of the filling is hidden inside the pastry, the same way that Esther’s true identity as  Jew was disguised, and the same way that it is said all the miracles of Purim directed by God were concealed.

It is also typical that ideas for Shalach Manot include wine! Since Purim is a joyous holiday it should come as no surprise. Wine always adds a celebratory note to any festive event. But there are several possible explanations that come from the Talmud and the Story of Purim itself. The Book of Esther distinctly states that the Jews rejoiced at Purim by drinking. The Talmud also says that on Purim, one is to drink to the point of not being able to distinguish between “cursed is Haman and blessed is Mordechai”! However, the Talmud also says that drinking should be moderate so as not to get so drunk as to break any of the commandments.

In accordance with tradition, then, we have paired each of our Purim baskets with a delicious wine. The wine in our Misloach Manot baskets are all Kosher and are imported from Galilee, Israel. 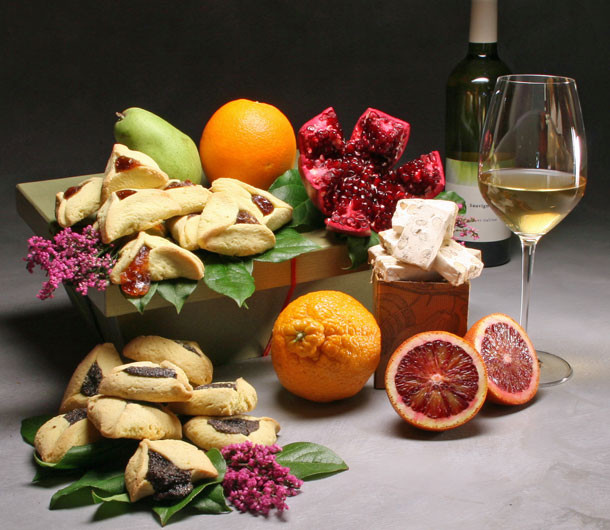 Purim Delight With Wine
(wine can only be delivered in New York State and Washington, DC)

We offer both a dry, full-bodied red wine (Alon, 2012 from several varietals) and a crisp and citrusy white wine (Sauvignon Blanc, 2016) from the Galil Mountain vineyard.

When reading the Megilla or the story of Purim, it is common practice to use a noisemaker or stomp one’s feet every time the name of Haman is spoken, as if to expunge him the way he wanted to wipe out the Jewish race.

Dressing up in costumes and/or masks is another Purim tradition. While the entire Book of Esther does not mention “God” at all, it is believed that God was actually guiding the way at every point in the story. In other words, God’s miracles were hidden from Esther and Mordecai. And Esther hid the fact that she was Jewish from the king who wanted to marry her. Dressing up may also reflect the dressing up in royal garb as Esther did as Queen and as Mordecai did when he was honored by King Ahasuerus. So disguise is an underlying premise of Purim.

Finally, it is expected that one will give to charities during the Purim holiday. Matanot L’evyonim or “gifts to the poor” are usually in the form of money and typically it would be the amount that would be spent on a meal. Alternatively, one could also send a meal. It is required to give the Matanot L’evyonim to at least two people, but often people choose to give to many in need.

Founder at Manhattan Fruitier
I founded Manhattan Fruitier in 1987. We will use our blog to talk more personally to our customers, recipients of gifts, and anyone who happens upon Manhattan Fruitier. We understand the special obligation we have as a gift service. After all, gifts reflect directly upon the sender and have the power to surprise someone and make them happy. Google+